Squadron 992 is a British propaganda film from 1940, and it's all about the Royal Air Force. So buckle up everyone, because it's going to be wall-to-wall aerial action, with Brylcreemed chaps leaping into their Spitfires and Hurricanes to do battle in the air with Jerry. Or maybe not. Because it turns out that Squadron 992 doesn't fly Spitfires or Hurricanes but looks after ... barrage balloons. Oh well. 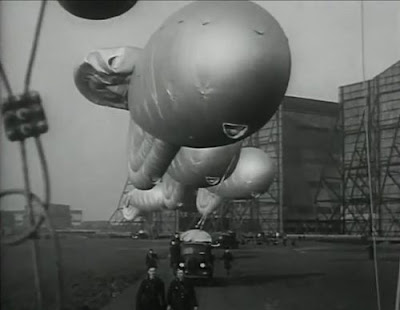 Barrage balloons were huge blimps tethered to the ground by a suitably sturdy cable. They were introduced as a defensive measure for use against aerial bombing, designed to force enemy bombers to fly higher and so make them less effective. The huge balloons became a familiar sight during the war, floating above towns, cities and other possible targets for air raids.

The day-to-day operations of barrage balloons is a tough subject to make exciting, but Squadron 992 does its best anyway. The film actually starts out amusingly enough, and there's even some wit in the script, with the narrator, the BBC announcer Lionel Gamlin, telling us that the men in the squadron are drawn from all walks of life, "from fishmongers down to financiers". There are also jokes about the men learning to sew and what good husbands they'll make some lucky girl after the war. "I hope my missus don't see this film!" says one of the married men. When we see them being rolled out, the narrator describes the semi-inflated barrage balloons on the ground as looking "rather like an elephant that's had bad news". 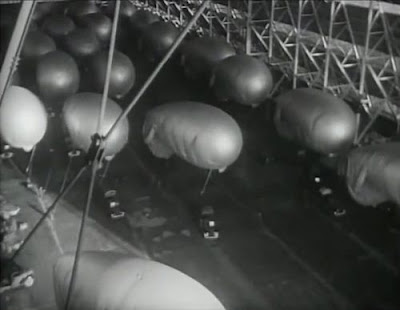 The director then gets a couple of nice overhead shots of a fleet of lorries towing the balloons, with the lorries dwarfed by the massive hangar they're housed in. These giant constructions look like they must be the airship hangars at Cardington in Bedfordshire, where one of the hangars is now used as a film studio.

Then we get an action scene, when a Heinkel He 111 bomber attacks the area around the Rosyth Naval Base and the Forth Bridge. This is vivid, but a bit of a messy sequence, as it's obviously pieces of footage from different places cut together. The He 111 is also played by a British aircraft, a Bristol Blenheim, much of the time, intercut with footage of a genuine He 111. This might have caused some consternation at the time, given the emphasis on the importance of aircraft recognition. Surely some knowledgeable member of the Observer Corps in the audience was shouting out "Don't shoot it, it's one of ours!"

Then the RAF fighters take off to intercept the enemy and the film boldly cross-cuts scenes of a poacher's dog chasing a hare on the ground with a Spitfire chasing the German bomber in the air. It's definitely on the nose, but it works. At one point, through camera trickery, the film manages to show both the aerial and the ground pursuit in the same shot. Warning to animal lovers: I'm afraid that the hare gets it. 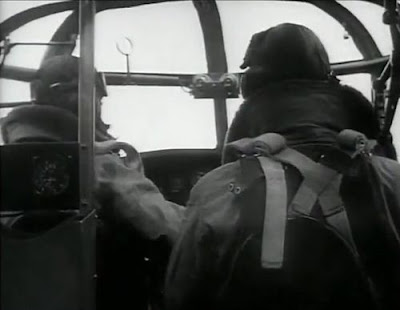 Now that the Germans have shown an interest in the area, Squadron 992 is sent to the Forth Bridge to deploy Britain's secret weapon: the barrage balloon! The squadron is shown leaving its base in an impressively large convoy. When they arrive at their destination, there are a lot of fairly thick Scottish accents from the locals and, inevitably since we're in Scotland, jokes about haggises.

In a reassuringly British touch, the senior officer tells his subordinates that in deploying the squadron's barrage balloons they shouldn't "do more damage to trees than is absolutely necessary." Yes, just because there's a world war on, that's no excuse to go damaging the local plant life.

The film ends with scenes of the barrage balloons aloft over the Firth of Forth. The narrator tells us: "There arises a new defence. Sentinels of the sky. A defence silent, peaceful, deadly. Watched by the men of Squadron 992." 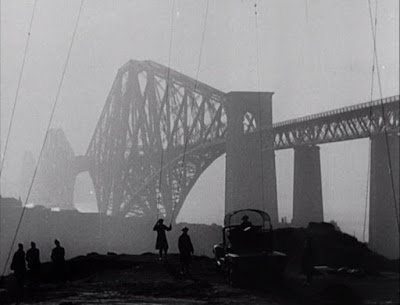 Squadron 992 was directed by Harry Watt, co-director of Night Mail (1936) and one of the leading documentary film makers of the time. It was produced by Alberto Cavalcanti, a Brazilian-born film maker who was often credited, as here, by just his surname. Harry Watt and Cavalcanti were closely involved with the British documentary movement before World War II and both later worked for Ealing Studios. The Heinkel attack was a recreation of a genuine raid on the Forth Bridge in October 1939 and obviously helped Harry Watt to add some drama to a subject he apparently struggled to dramatise.

As a film, the different elements of Squadron 992 don't quite hang together, but it has a lot of historical interest. Its theatrical run was cut short because changes in German tactics made barrage balloons increasingly redundant. According to Jez Stewart on the BFI's Screenonline, a recut version was shown in the U. S. as "Flying Elephants", but Harry Watt was unimpressed, calling this shorter version "facetious".