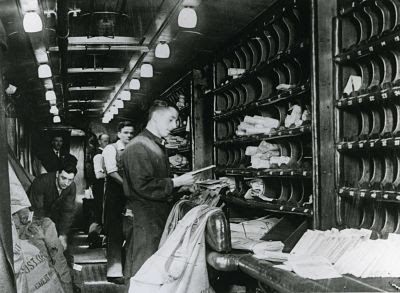 In a brisk 24 minutes, the film documents the overnight journey of the travelling post office train from London to Scotland. The film follows the train from the moment the letters are loaded into mail bags at Euston Station until its arrival in Scotland. The film was made with the co-operation of the LMS (London, Midland & Scottish) Railway and there are no actors, just ordinary people doing their everyday jobs.

There's something slightly heroic about Night Mail's determination to mythologise and romanticise something so ordinary and everyday as the delivery of letters. Or perhaps to make the audience see the extraordinary in something they might normally overlook. The film works as a series of vignettes and an accumulation of small details. The track workers who take a break when the train comes through. The passenger train waiting in the station, deferring to the all-important mail train. The workings in the signal box to allow the train through. The Farmer collecting his newspaper thrown down from the train as it passes. The different crews swapping banter as they change halfway, and their cheerful farewells to the canteen girls. And the puzzle in the sorting car over the correct destination for a badly-addressed letter (“Welsh, I think”).

The film promotes the efficiency and modernity of the postal service, while also incorporating high culture, in the use of the music of Benjamin Britten and the poetry of W. H. Auden in its final scenes, as the train arrives in Scotland. It also acts as a reflection on national character and unity, comparing and contrasting the nation's industrial centres, mining towns and small farms and portraying each region as connected by the universal postal service as, on a larger scale, are England and Scotland, while Wales typically receives a jokey mention.

But it's the final scenes of the film that turn Night Mail into a little masterpiece. As the mail train crosses into Scotland, the film transitions effortlessly and delightfully from the prosaic and the workaday to the lyrical and poetic. The train thunders across the wind-swept hills of the Borders and Benjamin Britten's music swells on the soundtrack, initially discordant, but then driving and purposeful. Then we hear the words of W. H. Auden's specially-written poem "Night Mail", beginning as a rhythmic verse matching the pace of the locomotive:

This is the Night Mail crossing the Border,
Bringing the cheque and the postal order,
Letters for the rich, letters for the poor,
The shop at the corner, the girl next door.

As the train arrives at its destinations in Scotland, the narration becomes warmer, more personal and more reflective. In its final scenes, Night Mail is no longer just about the sending of letters or an advert for the efficiency of the postal service, but a story about the human need for contact, acknowledgement and connection. The people sleep:

But shall wake soon and long for letters.
And none will hear the postman's knock
Without a quickening of the heart.
For who can bear to feel himself forgotten?

Night Mail was a product of the GPO (General Post Office) Film Unit, a significant sponsor of documentary shorts in the years before WWII. The GPO Film Unit was created in 1933 and overseen in its early years by John Grierson, the man who invented the term “documentary” for non-fiction films. The film was shot on location, apart from the interiors of the travelling post office, which were recreated at the GPO's Blackheath studios. It was written and directed by Basil Wright and Harry Watt and co-written and produced by Grierson. The makers brought in Alberto Cavalcanti to work on the sound, the poet W. H. Auden to write the verse for the film's final scenes, and Benjamin Britten to provide the musical score. Britten, Auden and Cavalcanti had all previously collaborated on the GPO short film Coal Face (1935). 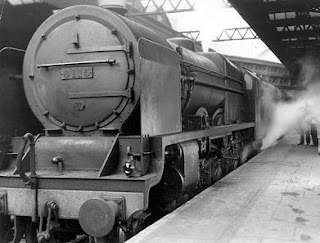 Unusually for a GPO short, Night Mail was shown commercially in cinemas and became popular with audiences. It's often seen as the standard bearer for the British documentary movement in the 1930s and remains one of its most celebrated short films. So much so that it inspired a loose sequel Night Mail II in 1987, as well as various pastiches and homages, including a 1980s TV advert for British Rail, directed by Hugh Hudson.

The GPO Film Unit only lasted a few years, but its influence lasted a lot longer. With the outbreak of WWII, it became the Crown Film Unit, with a broader wartime propaganda remit, and it produced notable documentaries like Listen to Britain (1942), Fires Were Started (1943) and A Diary for Timothy (1945). Basil Wright continued to work in and promote the documentary movement and formed his own company the Realist Film Unit, while Harry Watt stayed with the Crown Film Unit and made short films, including London Can Take It! (1940) and Target for Tonight (1941). John Grierson went on to found the National Film Board of Canada and is seen as the father of documentary film-making in both Britain and Canada.

The restrained style of the documentary movement films also found its way into British feature films in the 1940s, a result of the desire to produce more convincing representations of the experience of war than the British film industry had managed in the first couple of years of WWII. Both Harry Watt and Alberto Cavalcanti were recruited by Michael Balcon to join Ealing Studios to move its films towards a more realistic style. There Cavalcanti directed Went the Day Well? (1942) and Nicholas Nickleby (1947) and Watt helped Ealing to establish their Australian operation with The Overlanders (1946). The genesis of the understated style of many British films of the 1940s is recognisable in the documentary films of the 1930s, and Night Mail makes a perfect introduction to the work of the documentarists in the years before WWII.