Welcome to Day 3 of The World War II Blogathon.

We're marking the 80th anniversary of the start of World War II with this three day blogathon on films and TV series related to the war. 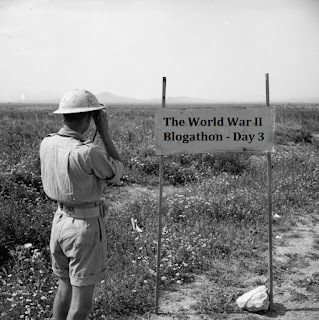 If you have any problems leaving comments here, then you can contact me on Twitter @CineEssentials or email me at cinemaessentials @gmail.com.

You can read the entries for Day 2 here.

I start things off today with a look at David Lean's epic The Bridge on the River Kwai.

And here's another classic from the archives, as an all-star cast parachutes into Holland in A Bridge Too Far.

Make Mine Film Noir uncovers a tale of post-war revenge in Cornered.

Diary of a Movie Maniac discovers The Secret of Santa Vittoria.

Sean Munger explores the last days of the Third Reich in Downfall.

Pale Writer uncovers the secret work of the Office of Strategic Services in the spy thriller O.S.S.

Taking Up Room follows a group of American nurses in the Philippines in So Proudly We Hail.

Retro Movie Buff is on a pilgrimage with Powell and Pressburger in A Canterbury Tale.

The Pure Entertainment Preservation Society goes under the waves with Cary Grant and John Garfield in Destination Tokyo.

Movie Rob sails into action with The Sea Wolves, checks out the original Inglorious Bastards and reviews the documentary Anne Frank Remembered.

Back to Golden Days joins the famous Doolittle Raid in Thirty Seconds Over Tokyo.