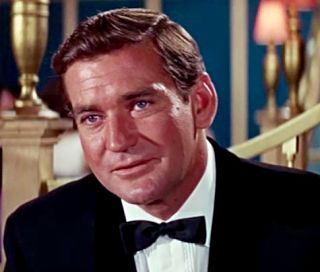 It doesn't really work, does it? But in the mid 1960s everyone was trying to cash in on the James Bond craze. Rival spy series included Matt Helm, Harry Palmer, Bulldog Drummond and Derek Flint. MGM's hopes for a Bond rival were pinned on Rod Taylor as Boysie Oakes in The Liquidator.

Taylor's character is an ex-army sergeant who is inducted into the British secret service by spy master Colonel Mostyn (Trevor Howard). Mostyn has been tasked by his boss (Wilfrid Hyde-White) to recruit an agent to carry out unofficial assassinations off the books. Mostyn recalls an incident in wartime Paris, shown in a black and white flashback sequence, when he was rescued by Oakes from two would-be assassins. Unbeknown to him, Oakes's heroics were mostly accidental. Oakes goes along with the plan, smitten as he is with the money he's paid, the E-Type Jaguar he's given, the swanky '60s bachelor pad apartment and the endless parade of beautiful women that come with it. 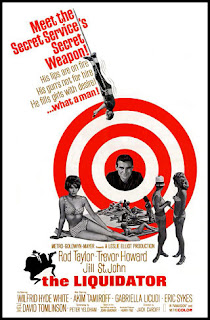 The problems begin when they actually start asking him to kill people. He tries to extricate himself from the job, but is unable to give up the enviable lifestyle, not to mention the chance to romance Mostyn's secretary (Jill St. John). So instead he sub-contracts his killings to a philosophical hit man, Mr Griffen (Eric Sykes). Things get complicated when enemy agents first try to kill Boysie on a trip to the Riviera, and then try and recruit him using a false flag operation to carry out an assassination of their own.

But there's quite a bit to enjoy for fans of sixties British cinema and spy films in particular, starting with a bold title sequence by Richard Williams and a pseudo-Bond title song (by Lalo Schifrin) belted out by none other than Bond regular Shirley Bassey. Trevor Howard is on good form as Boysie's no-nonsense boss, who convinces himself that Boysie is a cold-blooded killer and takes every denial as further confirmation of his ruthlessness. As Howard's secretary and Taylor's love interest, future Bond girl Jill St. John gets a little more to do than in Diamonds are Forever, including attempting a remarkably plummy on-again off-again English accent. There's also a strong cadre of British comic character actors in the supporting ranks, including Sykes, Wilfrid Hyde-White, David Tomlinson, John Le Mesurier, Derek Nimmo, Colin Gordon and Richard Wattis.

The finale involves Taylor, Tomlinson and Jill St. John going undercover on an RAF airbase, supposedly as part of a training exercise, and an attempt to steal the latest hi-tech jet aircraft. Like the hijacked plane in the same year's Bond film Thunderball, this is played by one of Britain’s V bomber force of the 1960s, although this time it's the Vickers Valiant in a rare film appearance. Ironically, although it plays the “plane of the future”, by 1965 the Valiant was already obsolete.

The film is based on a novel by John Gardner, and it was the first of eight books he wrote featuring Boysie Oakes. In another of the film's Bond connections, Gardner would take over writing the James Bond novels in the 1980s and 1990s. Rod Taylor could have made a creditable James Bond himself and was approached for the part by Eon Productions before Sean Connery took the role. Taylor turned the part down and came to bitterly regret it, as each subsequent Bond film became more phenomenally successful than the last. Like many actors who regret passing on a role, Taylor's response was to take the next one that looked vaguely like it.

The film was directed by Jack Cardiff, one of the world's great cinematographers, and is one of around a dozen features he directed. Cardiff keeps things moving and acquits himself well and, while The Liquidator didn't lead to a hoped-for series, it's a decently budgeted and generally well paced sixties time capsule that's still worth a look.