Ridley Scott has a pretty good track record making historical epics, probably better than anyone else alive. Right from his first film, The Duellists (1977), Scott showed an unrivalled ability to recreate the historical past, whether on a relatively low budget or on a megabucks blockbuster one. So if you're making an historical epic, Ridley Scott is the man you want directing it. 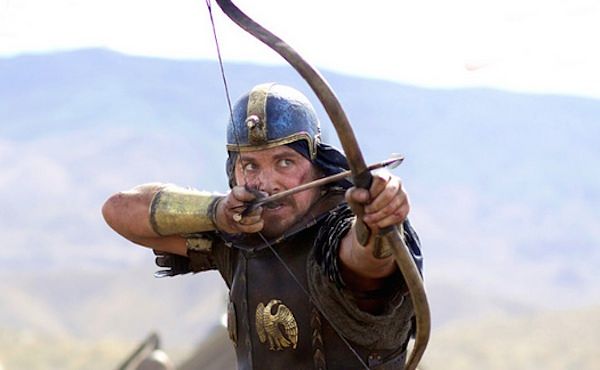 Exodus: Gods and Kings is a retelling of the Biblical story of Exodus. Moses (Christian Bale) is an Egyptian general and adviser to the Pharaoh Ramses (Joel Edgerton). When his background as the child of Hebrew slaves is discovered, Moses goes into exile, marries Zipporah (María Valverde) and becomes a shepherd. Eventually he comes to terms with his fate, based on a prophecy suggesting that he is the man destined to lead the Hebrews out of slavery and into the promised land. The catalyst for this is a vision, involving the burning bush and a young boy who appears to be the personification of God, or maybe his messenger.

Moses starts a guerrilla war against the Egyptians and delivers an ultimatum to the Pharaoh; Give the Hebrew slaves the same rights as Egyptians or let them go free. When the Pharaoh refuses, a series of plagues is visited upon Egypt, including flies, locusts, frogs, boils and the death of all first born children. When the Hebrew slaves are eventually released, Moses has to lead them to Canaan, and outrun the pursuing Egyptian army.

The film is based on a screenplay by Adam Cooper and Bill Collage, with two new writers, Jeffrey Caine (Goldeneye, The Constant Gardener) and Steven Zaillian (Schindler’s List) brought in by Ridley Scott to develop the script. The film is a sort of atheist's version of a Biblical story. Probably knowing that much of a modern western audience, as well as those growing non-western markets like China, will probably not accept the literal truth of Biblical miracles, Ridley Scott has refashioned the Exodus story into a secular blockbuster. That probably sounds like a bad idea, and it is.

The film strongly suggests that when Moses first speaks to "God", he is in fact hallucinating after a blow to the head. And when the Hebrews need to cross the Red Sea, instead of Moses literally parting it, the water simply recedes making it shallow enough to cross, retreating, according to Scott, because of an underwater earthquake. A more plausible explanation might have been to go with the scholars who believe that Moses really parted a reed sea, in other words a shallow river or lake, but that probably wouldn't have been grand enough for the CGI boys to work on.

The script tries to give us logical explanations for other Biblical miracles, but does it half-heartedly and unconvincingly and the effect is muddled and uncertain. What caused the plagues of Egypt if it wasn't divine intervention? The film doesn't really know. It's theoretically possible to re-tell a Biblical story in an ambiguous way, offering the possibility of logical explanations for apparently divinely ordained events, but Exodus: Gods and Kings doesn't really manage it. 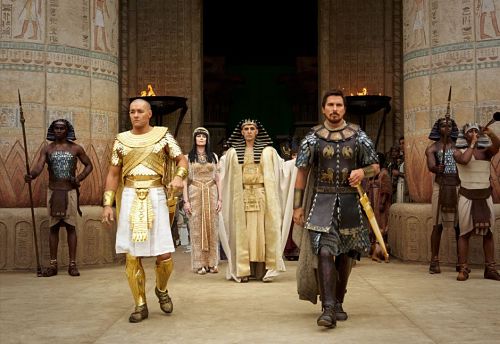 The film also falls down on its characterisation. Neither Moses or Ramses, or anyone else really, are developed characters beyond the basics. Bale gives us one of his solid, gruff, but occasionally thoughtful types with an inexplicable American accent, while Edgerton seems a little uncomfortable with shaven head and Pharaoh's bling (and what he's doing with that python wrapped around him is anybody's guess). Some casting of the supporting roles is predictable (you knew Ben Kingsley would be in there somewhere) and others a little eccentric (John Turturro as Ramses's father, Seti, although some claim there is a resemblance). Sigourney Weaver is in there too as Tuya, but she doesn't have a lot to do.

The plodding screenplay also produces some clunky dialogue, as in the scene where Moses demands Ramses let the Hebrews go free, and the Pharaoh replies "From an economic standpoint alone, what you're asking is problematic," a line many reviewers loved to hate, and which might have been written by George Lucas in his Phantom Menace days. And the scenes where Moses asks his wife if he may "proceed" before touching or kissing her, is a painfully 21st Century touch.

What the film does have is plenty of spectacle, at least of the heavily CGI'd kind, with massed armies, epic battles, the Red Sea "parting" (well, receding) and CGI plagues of flies, frogs and overly-friendly crocodiles. The film also has a rather dark and overly polished look, as if someone has gone a bit mad with digital grading software. The production values are high though and the film reunites Scott with his regular production designer on his epic films, Arthur Max, and costume designer Janty Yates, who both worked on Gladiator (2000), Kingdom of Heaven (2005) and Robin Hood (2010).

The film deviates not only from the Bible, but from the historical record, incorporating the Battle of Kadesh of around 1274 BC, and showing Hebrew slaves building Egypt's Pyramids, even though the Pyramids were built long before the arrival of Hebrews in Egypt. There's also an ongoing debate over whether the Pyramids were even built by slaves. No doubt they were included to give Scott the chance to incorporate eye-catching CGI recreations of a half-built Sphinx and unfinished Pyramids. 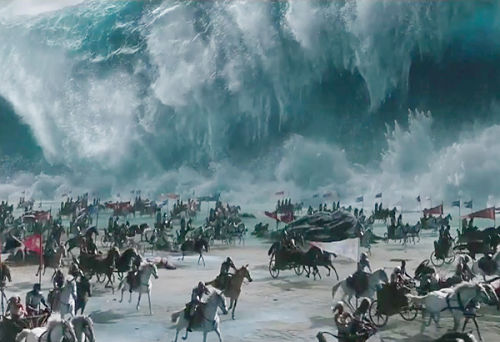 The film roused the now inevitable controversy over the casting of mostly white actors in the Egyptian and Hebrew roles. Scott explained in an interview with Variety:

"I can’t mount a film of this budget, where I have to rely on tax rebates in Spain, and say that my lead actor is Mohammad so-and-so from such-and-such. I’m just not going to get it financed. So the question doesn’t even come up."

This is no doubt true, although it could have been phrased a little more delicately.

Exodus: Gods and Kings was mostly shot in Spain with studio interiors filmed at Pinewood Studios in England. It was inevitably an expensive production, made for an estimated $200 million, with $60 million of that returned in tax credits, but was a box office disappointment, not even coming close to breaking even when marketing and distribution costs are included. Despite a few decent reviews, including from The Hollywood Reporter and Variety, the film had a rough ride from the critics, and an even harsher judgement from the Egyptian Government, which banned it as a "Zionist view of history", probably due largely to the Hebrews building the Pyramids thing. The United Arab Emirates and other Middle Eastern countries followed suit.

Perhaps some of the critics were a little harsh though. Exodus: Gods and Kings isn't a total bust, it's just a little joyless and mediocre. But while it has its moments of grandeur and eye-catching visuals, without allying them to an absorbing screenplay, effective characterisations or a consistent and coherent vision, the film is too often reduced to a hollow spectacle.