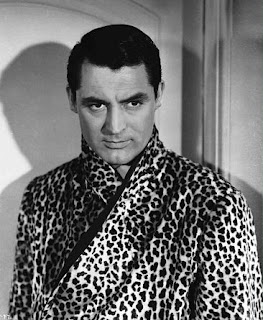 In My Favorite Wife, Cary Grant plays successful lawyer Nick Arden, a man who is about to marry his second wife, Bianca (Gail Patrick). But first he has to have his first wife declared legally dead. She has been missing, presumed drowned, for ten years after her ship sank on an anthropological expedition in the Pacific. Arden manages to get the legal issues sorted without too much trouble, promptly marries Bianca, and they set off on their honeymoon to Yosemite. There’s just one problem, Nick's first wife, Ellen (Irene Dunne), isn't really dead. And (wouldn't you know it?) she reappears as soon as he has remarried, now leaving him with two wives (sort of). She rushes off to Yosemite to gatecrash their honeymoon before, it's implied, the marriage is consummated.

Man and first wife are reunited, but soon the inevitable plot complications start to kick in, including the revelation that Ellen spent 7 years alone on a Pacific island with a tanned, toned superman (Randolph Scott, no less) who now wants to take her back there. Grant now looks at her askance, not sure if he wants her back or what exactly took place on that island. 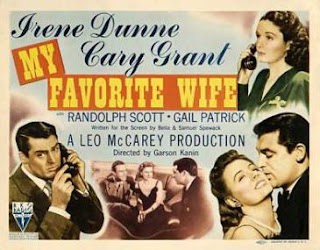 My Favorite Wife is wildly contrived, but fun if you're in the mood. It belongs to that subset of screwball comedy where husbands and wives think they might want a divorce (The Awful Truth) or discover that they're not really married after all (Mr and Mrs Smith). There's a fair amount of risqué comedy (for the time) and misunderstandings around Grant's two “wives”, as well as some mild jabs at the legal system. It's also the kind of film where it's obvious where the story will end up right from the beginning. The plotting is absurd and illogical and there's never any doubt about the very simple resolution to this problem, especially as Nick makes it clear right away that he's not in love with Bianca, and he and Ellen already have two children together. In fact the inclusion of those children is a little awkward and they are treated just a bit too casually by the script and the characters, with Ellen even failing to tell them that she is their mother, while trying to rekindle her relationship with them. 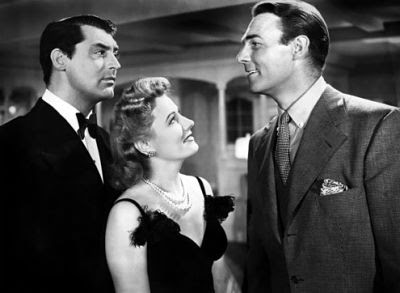 But the audience needs to play along and, if it does, will find that My Favorite Wife is an easygoing entertainment with enough laughs to justify itself. Dunne is on good form and Grant is even better. He gets most of the laughs and the film relies heavily on his charm and comic expertise, which are repeatedly to the fore. As with other films of Grant's in this genre, part of the appeal is the contrast between his superficial urbanity and his characters' increasing discomfiture and awkwardness with the events happening around them. Dunne's part is not quite so good, she has to bond awkwardly with her character's children and gets a scene where she puts on a comic "southern" ("Well howdy, y'all!") accent. Among the supporting cast, Gail Patrick does a good job making her character unsympathetic, despite her being the person who is the most hard done by here, there's a memorable Granville Bates as the exasperated judge, and the chance to see Randolph Scott in an unusual comedy role. 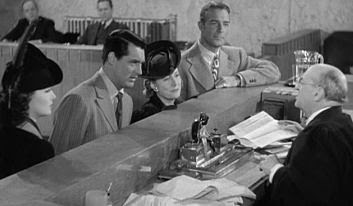 My Favorite Wife was a re-teaming of Grant and Dunne after their romantic comedy The Awful Truth (1937) directed by Leo McCarey. McCarey was slated to direct this one too, but a bad car accident put paid to that, so Garson Kanin was brought in. The script, by Sam and Bella Spewack, feels like it was patterned after the success of the earlier film, with similar story beats. It creates some funny sequences but has trouble sustaining its momentum and just sort of peters out at the end. The story, credited to the Spewacks and Leo McCarey, was inspired by the Tennyson poem "Enoch Arden", about a man who returns home after ten years to find his wife has remarried. There is a trace of this in the name of Dunne's character, Ellen Arden. Hollywood couldn't keep away from this storyline for very long, with the same premise being used in Too Many Husbands (also released in 1940) and its remake Three for the Show (1955), in 1963's Move Over Darling, and in Marilyn Monroe's final, unfinished film, Something's Got to Give.

My Favorite Wife was a decent sized hit, and was nominated for three Academy Awards, for best story, best score and best art direction, although I'm not convinced any of them were really deserved. While it isn't quite up to Grant and Dunne's first pairing, The Awful Truth, My Favorite Wife is pretty entertaining. It's fluff, but it's expertly performed by a cast who can wring the laughs out of the absurd situations and contrived plotting, and it doesn't outstay its welcome.