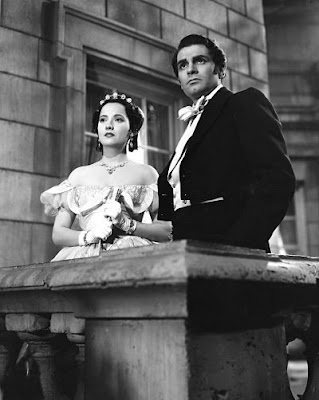 It’s a dark and stormy night on the Yorkshire Moors. A man lost in the snow stumbles upon a gloomy old house, "Wuthering Heights". The man is Lockwood (Miles Mander) a new tenant of the Heathcliff family, the owners of the house.

Lockwood asks for shelter during the storm and it is very reluctantly given by its taciturn owner, Mr Heathcliff (Laurence Olivier). At the window of his room, Lockwood thinks he sees the ghostly vision of a woman on the moors.

When Heathcliff hears of this he goes wild, throwing Lockwood out of the room and calling at the window, “Cathy, is that you? My Cathy, Cathy, Cathy” etc, etc. When Lockwood tells the housekeeper (Flora Robson) of this, she sits him down for a nice long flashback, telling the whole story of Heathcliff and his lost love Cathy Earnshaw.

Cathy's family were living in comfort at Wuthering Heights when one day their father brought a grubby street urchin back from Liverpool to adopt into their family. Why he did this isn't entirely clear, given that there must have been thousands of grubby urchins on the streets of 19th Century Liverpool. But anyway, as they grow up together, Heathcliff and Cathy become inseparable, while the boy is resented by Cathy's brother. Despite the mostly British adult cast, all the children in these scenes have American accents, but let's not quibble too much. 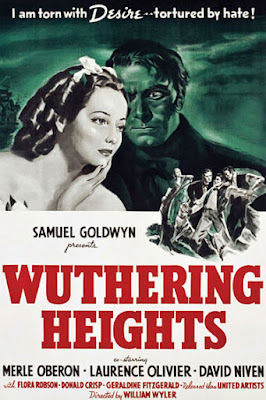 Their relationship changes when the two of them sneak into the grounds of the grand house of the Linton Family, where a ball is being held. When Cathy's leg is mauled by a guard dog, Heathcliff swears revenge and places a curse on the house.

But while convalescing there, Cathy comes to enjoy the rarefied world of the Lintons and the company of young Edgar (David Niven). When she returns home she scorns Heathcliff, and then makes up with him. She's torn between the wild Heathcliff and the opulence and comfort of the Lintons. We know this because a) we can see it and b) the script makes sure she tells us.

Wuthering Heights was produced by Samuel Goldwyn and was a prestige production of its time. It was originally a project of another independent producer, Walter Wanger, who intended it for Sylvia Sidney and Charles Boyer. Goldwyn took over when his star director, William Wyler, showed an interest. Wyler had it in mind for Bette Davis, his leading lady on Jezebel (1938), but Goldwyn chose his contract star Merle Oberon to play Cathy instead. When Goldwyn's first choice for Heathcliff, Ronald Colman, was unavailable, he decided to cast Laurence Olivier. (Among the many other actors considered for the part of Heathcliff was James Mason, who would have been terrific.)

The film is a softened and truncated version of Emily Bronte's 1847 novel. It draws its plot from the book's first half, skipping almost all of the second, which continues the story into the next generation, following the children of the original characters. The setting was also brought forward from the Regency era (early 19th century) to the early Victorian period (about 40 years later) to provide more attractive costumes for its female star.

500 acres of the San Fernando Valley in California were covered with tumbleweed coloured with purple sawdust to simulate the heather of the Yorkshire Moors, and 1000 heather plants were imported from England for close ups. The film went $100,000 over budget and the “ghostly” ending was filmed against Wyler's wishes, with Goldwyn bringing in another director to shoot the final scene. 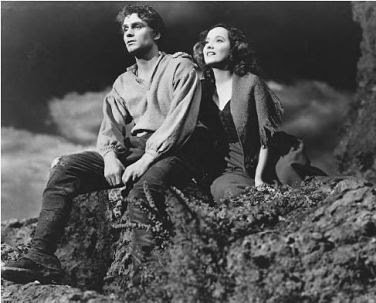 The film is an overly simplified version of the novel and the characters are made more sympathetic with the story turned into a doomed romance.

The chemistry between its stars is a little iffy, probably because they didn't enjoy working together and Olivier would have preferred Vivien Leigh as Cathy. Olivier has been highly praised for his performance, but he has a little too much Royal Shakespeare Company gentility to convincingly play the younger, uncouth version of Heathcliff, although he is more in his element as the elegant, well dressed gentleman of the later part of the film.

Cathy is probably Merle Oberon's most famous role but the script makes it a difficult part to play. In fact, neither the sulky, sullen Heathcliff nor the flighty Cathy make very sympathetic characters and it takes all the charisma the actors can muster to make the audience care at all about this pair. David Niven comes out about as well as can be expected in the thankless role of Cathy's husband, Edgar Linton.

Not only are the characters a little unlikeable, but the schematic plot tends to reduce them to pieces on a chess board. Characters are manipulated for the convenience of the writers, and Heathcliff simply disappears and reappears as the plot demands. The script is at once too on the nose and too vague. It spells everything out all too clearly, except for the most important plot elements, like Heathcliff's years in America and his new-found wealth, the source of which is never explained. But this does at least provide some unintentional humour, as when Heathcliff reappears:

Cathy: We all wondered where you went.


I think Cathy speaks for the audience too.

One thing Wuthering Heights does have is plenty of atmosphere, aided by the moody cinematography 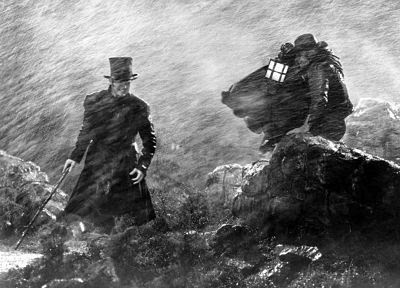 of Wyler regular Greg Toland, and Alfred Newman's atmospheric music. But at heart it's a faintly absurd melodrama, with ghosts, storms, spooky old houses, talk of curses and black hearted rogues and love that never ever dies. Its especially hokey ending turns Emily Bronte's story about human cruelty and revenge into a tale of doomed romance and love's triumph even over death. Well, that's Hollywood for you.

The film was not a financial success and it didn't make a profit until a re-release in 1950, but the American critics lapped it up and the film was nominated for 8 Oscars, including Best Picture and Best Actor for Olivier, but won only for Toland's cinematography.

While this version of Wuthering Heights is decidedly under-nourished and over-cooked, there is also something slightly cherishable about it; its moodiness, it's theatricality, even its naïveté. At least if you're prepared to surrender to it, wallow in the atmosphere, and don't think about it too much.