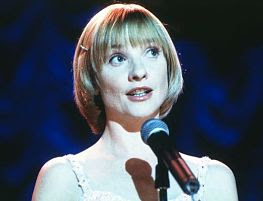 Laura is a painfully shy young girl. So shy that she can barely answer the telephone, and so quiet that her mother has nicknamed her “L.V.” for “Little Voice”. She lives in a seaside town in the north of England with her brassy, domineering mother (Brenda Blethyn) and memories of her more sensitive, music loving father. L.V. (Jane Horrocks) spends most of her life in her room, listening to her late father's record collection, and performing perfect imitations of Marilyn Monroe, Shirley Bassey, Judy Garland and other famous female singers of the past.

Her life changes dramatically when two men take an interest in her. The first is young telephone engineer and pigeon fancier Billy (Ewan McGregor), who has hopes of romance with L.V. The second is small time agent Ray Say (Michael Caine) who, halfway through a drunken fumble with her mother, hears L.V. singing upstairs. He is entranced, and thinks she can be his ticket to the big time. He arranges for her to sing at the local club run by Mr Boo (Jim Broadbent), but L.V.'s shyness and lack of preparation leads to disaster. Ray perseveres though, and is sure he can get L.V. to find her voice. He persuades her to perform in front of a packed audience and under the gaze of big time London promoter Bunnie Morris (Alex Norton). 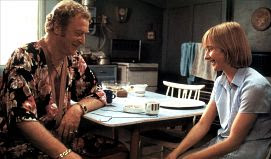 Little Voice is written and directed by Mark Herman and based on the play The Rise and Fall of Little Voice by Jim Cartwright. The original 1992 stage production was directed by Sam Mendes at the National Theatre in London. The film and play were designed to showcase the talents of Jane Horrocks, and her singing and impersonations of famous female singers are remarkable. The film's centrepiece is L.V.'s second, triumphant performance, where Horrocks gets to run through her extraordinary repertoire.

But what made for a memorable night at the theatre doesn't quite translate onto film. Little Voice only really works in fits and starts and the treatment often lacks subtlety, with the director much more comfortable and assured with the comedy than he is with the drama. But like Mark Herman's previous film, Brassed Off (1996), there is quite a bit to enjoy and plenty of earthy northern humour. In Little Voice it's often at the expense of the low quality, end-of-the-pier acts at Mr Boo's night club. The irony here is that some of the acts we're meant to laugh at, like the overweight boy band "Take Fat", would probably end up on prime time TV now on Britain's Got Talent. 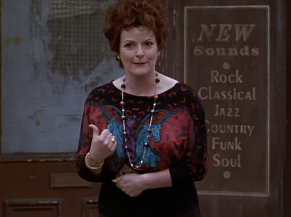 As a comedy, Little Voice mostly works. As a tragedy and a character study ... mostly not. The film attempts to open the play out with location filming in the Yorkshire seaside town of Scarborough, but Herman's style is altogether too realist for the material. The story is a fanciful one that needs a touch of the fairy tale. The film doesn't delve into L.V.'s peculiar background and when it takes a turn into tragedy it rings false. And the seedy agent Ray Say's faith in L.V. and willingness to spend every penny he owns promoting her, when she suffers from stage fright and crippling shyness is just not very plausible. The symbolism is also unsubtle, with the film drawing a clunky parallel between L.V. and one of Billy's racing pigeons that's desperate to fly the coop and not return home.

The performances are also a mixed bunch and the characters are painted in very broad strokes. Brenda Blethyn portrays L.V.'s mother as a crude stereotype of a working class, middle aged woman; crude, crass, boozy and sex-starved. Fortunately Horrocks is much better, although she only really gets a chance to shine in her big musical show scene. Ewan McGregor is okay in a low-key, under written role as L.V.'s sort of boyfriend, and Jim Broadbent is reliable as the small time club owner who gives L.V. her big break. Best of all though is Michael Caine, who is terrific as the gloriously tacky agent Ray Say. But the contrast in acting styles is jarring and the overbearing performance of Blethyn threatens to overwhelm some of the subtler actors. 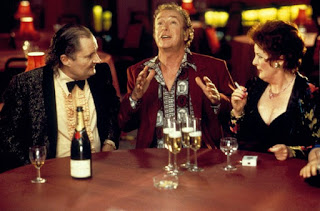 Remarkably, of the three leading actors, it was Brenda Blethyn who was nominated for an Academy Award, as Best Supporting Actress, as she was now on the Academy's radar following her previous nomination for Secrets and Lies (1995). Michael Caine did win a Golden Globe Award, with Horrocks and Blethyn both nominated, and all three received BAFTA nods. In fact, the film probably did more for Caine than for Horrocks and marked the beginning of a career renaissance for him after a rough decade appearing in straight-to-video efforts, a Steven Seagal movie, and (shudder) making a film for Michael Winner. Within a couple of years he had a second Academy Award as best supporting actor, for his performance in The Cider House Rules (1999).

As a stage to screen transfer, Little Voice is only fitfully successful. Its attempts at symbolism are a little heavy-handed, its characters are often crudely drawn and the story sort of falls apart in its final act. But it's occasionally funny script makes it moderately entertaining and it's worth seeing for the performances of Michael Caine and Jane Horrocks in particular. And Caine fans can celebrate the fact that his career renaissance began here.