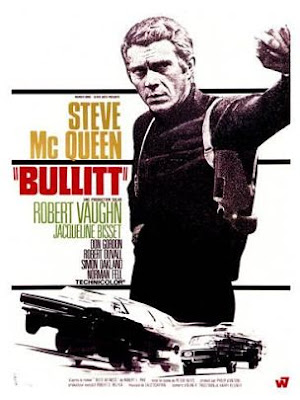 He's a tough cop policing the mean streets of San Francisco. A maverick, who doesn't mind breaking the rules to get the job done. No, not Dirty Harry, the other one.

Steve McQueen was at the height of his fame when he made Bullitt, a tough cop thriller that paved the way for all the other tough cop thrillers of the 1970s. McQueen stars as the improbably named Frank Bullitt, a plain clothes Lieutenant in the San Francisco police department. Bullitt is assigned
to protect a key witness for a senate sub-committee hearing into organised crime, overseen by Chalmers (Robert Vaughn). When his star witness is killed, Bullitt has to cover it up and goes after the killers himself.

Despite its fame, Bullitt is essentially a fairly ordinary policier lifted by the presence of McQueen and the contribution of the film's director Peter Yates. The film, based on the novel “Mute Witness” by Robert L. Pike, is weakly plotted and the storyline doesn't bear close inspection. As a mystery, it's almost totally uninteresting and the resolution raises as many questions as it answers. What the film does have is a lot of style, especially in its opening sequence with the titles moving up, down and across the screen and set to Lalo Schifrin's almost effortlessly cool theme music.

Almost as cool is Steve McQueen himself as the laconic hero. Bullitt is one of his most famous and iconic roles, but it's one of the star's more muted performances. McQueen is at his most taciturn, giving us a lot of serious expressions and intense looks. It's less a great acting performance than a demonstration of how a charismatic actor can hold the screen, even when his star power is on a relatively low wattage. The film works hard at making its star look cool, dressing him in roll neck sweaters and sports jackets, giving him a muscle car and a beautiful, arty girlfriend (Jacqueline Bisset). 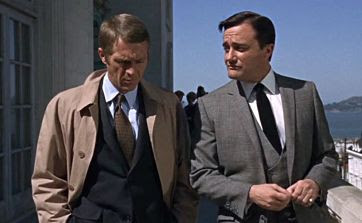 It's also a violent film for its time, and aims for a greater sense of realism than we see in a lot of American films of the mid-sixties. Peter Yates's direction employs a verite style, often having his camera lurking in the presence of the characters, giving the audience the impression that it's eavesdropping on real conversations. The film was shot entirely in and around San Francisco, with Yates using the new lightweight Arriflex camera. It makes good use of its locations and helped to popularise the city as a setting for films and TV series. Perhaps it's no coincidence that when Dirty Harry appeared three years later, he was also a maverick cop in the same city.

Among the supporting cast, the most memorable performance is from Robert Vaughn, as a political bigwig who becomes at least as much an antagonist to Bullitt as the bad guys. Bisset has a thankless role as Bullitt's awfully English girlfriend who abhors all this horrible shooting and whatnot, and Robert Duvall appears in a minor role as a taxi driver who is seen mostly through his rear view mirror.

What particularly raises Bullitt out of the ordinary are two strong action sequences, the finale at an airport, which has McQueen pursuing his quarry across the tarmac while dodging taxiing airliners, and its most famous sequence, a car chase through the streets of San Francisco. The car chase, running for around 9 minutes, is easily the film's stand out sequence, one of the most eye-catching pieces of tyre-squealing action in American cinema at that time. 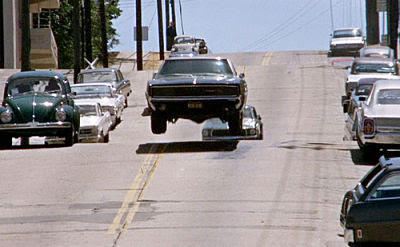 Bullitt is heading back to his car when he spots a black car parked up nearby and eyes it suspiciously. When he drives off, he watches as the car follows him. He loses the tail in the maze of streets and then turns the tables, providing us with a classic moment when his Ford Mustang appears in the bad guys' rear view mirror, set to Schifrin's tension-building music. There then follows a break-neck chase, through the streets and up and down the hills of San Francisco, between two classic American muscle cars, McQueen in his Mustang and the villains in their Dodge Charger. The sequence is brilliantly shot and edited and it was no doubt this scene that netted the editor Frank P. Keller various editing awards, including the Oscar for best film editing.

The scene is a favourite for nit-pickers, as careful viewing reveals various goofs, including the same VW Beetle being seen at least three times as the cars drive past it, and McQueen shifting up through more gears than seems physically possible. The sequence led to various attempts at copycat car chases in cop thrillers of the '70s, and the car/elevated train sequence in The French Connection (1971) was a deliberate attempt to outdo it. Bullitt's producer, Philip D'Antoni, also produced that film and directed another notable car chase flick The Seven Ups (1973). 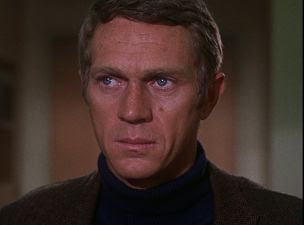 But the success of this sequence as an action set piece underlines the script's weaknesses. The film's highlight is a scene that is completely redundant, adding nothing to the plot or the characters, and it has the strong whiff of something that's been included purely to beef up a lacklustre story. Bullitt was the first American film of its director, Peter Yates, who was sought by Steve McQueen after he had seen his previous film, the British crime thriller Robbery (1967). Robbery is also notable for its excellent car chases, so it's highly likely that McQueen had this particular sequence in mind when the director was chosen.

Like its contemporaries Bonnie and Clyde (1967) and The Wild Bunch (1969), Bullitt began to up the ante in screen violence. It's also one of the earliest instances of the word “bullshit” being heard in an American film, uttered by McQueen himself. Anticipating the cinema of the 1970s, the film ends on a low key note and with a sense of weariness and introspection after its violent climax. While Bullitt helped to popularise the cop thriller, he wasn't the only maverick cop around at the time, with Madigan and Coogan's Bluff both appearing in the same year.

Bullitt was perfect in its timing and genre positioning, making it one of the most significant American films of the late 1960s. It's inevitable that what was once vivid and realistic now seems more than a little faded, especially given that Bullitt has been much imitated over the years. Aside from its generally strong technicalities, what we are left with is a couple of good action sequences, an iconic star at the peak of his fame, and a rather calculated sense of '60s cool. But that is just about enough to make it one of the most distinctive American films of its time, and a classic of its kind.