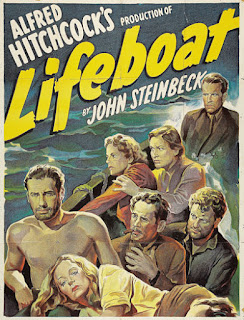 Other than his two propaganda shorts for the British Ministry of Information, Aventure malgache and Bon Voyage (both 1944), Alfred Hitchcock never showed much interest in making war films. The closest he came to the genre was 1944's Lifeboat. Lifeboat was also one of Hitchcock's occasional experiments in making a film set in only one location.

The film opens with a passenger ship being sunk in the Atlantic by a German U boat, after which an assortment of survivors gather together in the same lifeboat. From then on the film is set entirely in this one location, with only a limited cast of characters. The survivors include an unsympathetic high society journalist (Tallulah Bankhead), a millionaire industrialist (Henry Hull), a nurse (Mary Anderson), and an evacuee mother (Heather Angel) who is still carrying her dead baby. There are also four crewmen from the sunken ship – William Bendix, John Hodiak, Canada Lee and Hume Cronyn (oddly cast as an English sailor).

As the U-boat was itself also sunk, one of the crew members (Walter Slezak) also finds his way into the boat. Although he initially pretends to be an ordinary seaman, the other survivors eventually discover that he was in fact the submarine's captain. He also has his own supply of water and a concealed compass. The survivors have to deal with the elements, the lack of supplies and DIY amputations, while in the background Hodiak and Bankhead develop a sexually charged love-hate relationship across the class divide. When the German submarine captain emerges as the most competent leader, the group have to decide whether to trust him and his navigating, which is allegedly designed to take them to Bermuda.

Lifeboat is based on an unlikely premise and there is rather more talking, singing and flute playing that you might expect from a group of people with barely a drop to drink. But the film has a classic set up that's hard to resist - take a disparate group of shipwreck survivors in a desperate situation and put them together with the man who sank them. The film raises questions of politics, if often obliquely, as well as the moral dilemmas and questions of trust that the survivors must face.

The characters are stock types, but this is probably deliberate. They represent a cross section of society; rich, poor, young, old, black, white, male, female, even workers and capitalists, and it's not too much of a stretch to see an element of political allegory. The survivors are lost, confused and disorientated, uncertain of who should lead or where they should go. Then a natural leader emerges among them, the German captain. He is the most experienced and competent, is physically strong and an authority figure, knows seamanship and navigation, and promises to take them to safety. But where exactly is he leading them? 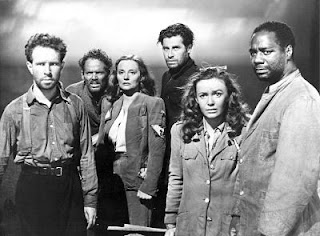 To 21st century eyes, the German captain looks like a reasonably stereotypical nasty Nazi. But the character caused controversy at the time, as he is seemingly the most capable and competent of those on board, and plays into stereotypes of the ubermensch and Nazi invincibility. Bosley Crowther of the New York Times argued that with only a little editing the film could be turned into Nazi propaganda, while The Writers War Board attacked it as a "credo of German super-intelligence and of the degeneracy of the democratic peoples." A modern audience would probably be more likely to notice the treatment of Canada Lee as the black seaman, who is charmingly referred to as “Charcoal” by Bankhead's character, although it may not be that inaccurate for her character and the time period.

Among a cast of mostly character actors, it's Bankhead who has the closest thing to a star part as the cynical journalist. This was her first film in Hollywood for a decade (excepting a cameo as herself in Stage Door Canteen), and marked probably her best screen performance. She was named Best Actress by the New York critics, but Lifeboat didn't lead to a revival of her film career and she returned to the stage after one more film, A Royal Scandal (1945).

It was Hitchcock himself who came up with the story idea for Lifeboat, and no doubt it was the technical challenge of filming in such a confined space that most attracted him to it. His first choice for screenwriter was Ernest Hemingway, but when he passed, John Steinbeck was chosen instead. The film is billed as “Alfred Hitchcock's production of John Steinbeck's Lifeboat”, but little of Steinbeck's script was used and his name was employed mainly to give it some more critical respectability. The final screenplay was credited to Jo Swerling, but a variety of uncredited writers were used, including Mrs Hitchcock (Alma Reville) and Ben Hecht, who was hired to give the script a final polish.

The film was shot entirely in the studio tank, with the cast enduring their fair share of disasters, including Bankhead catching pneumonia, and Hume Cronyn breaking two ribs filming the scene where he is swept off the boat. The film never leaves its one setting and, to aid realism, there is no musical score, except over the titles. The wittiest part of the film is Hitchcock's traditional director's cameo. Given the limited setting and paucity of characters, this must have been a tough one to incorporate. In the end, Hitch's picture appears in the before and after photos for a weight loss advert in a newspaper read by one of the characters.

Lifeboat was filmed on a budget of just over $ 1.5m and was one of Hitchcock's less commercially successful films. It did, however, net him his second Academy Award nomination as best director. That Oscar nod was well deserved, because Lifeboat again shows Hitchcock's command of technique and his willingness to experiment. Despite stereotypical characters and obvious propaganda intent, Lifeboat turns out to be a fairly sturdy vessel. Although the premise is unlikely, the plight of torpedoed survivors was a topical one and the film still has the power to shock and surprise. Compared to Hitchcock's later restricted-setting films, Lifeboat is oddly half-forgotten, but it really shouldn't be. This is one of the most successful of Hitchcock's experimental films, and his handling of the material and the technical challenges here is first rate.