The Pride and the Passion has four stars – Cary Grant, Frank Sinatra, Sophia Loren, and a massive cannon. And it's the cannon that gives the best performance.

Based on the 1933 novel The Gun by C.S. Forester, The Pride and the Passion is set in Spain in 1810, during the Napoleonic Wars.

As the French Army advances, the retreating Spanish put their massive prize cannon out of action by pushing it into a ravine. Spain's British allies come to take possession of the cannon, and when their representative, Royal Navy officer Captain Anthony Trumbell (Cary Grant) arrives, the Spanish guerillas agree to help recover the gun. But their condition is that it's taken first to the town of Avila to use against the French.

This sets into motion an epic trek, taking the enormous cannon overland without the French discovering or intercepting it. Because this is 1950s Hollywood, it also sets into motion a love triangle between Cary Grant's British officer, the leader of the Spanish guerilla forces, Miguel (Frank Sinatra), and Sophia Loren as the latter's sultry girlfriend, Juana.

The most obvious problem with The Pride and the Passion is the two male stars. Grant looks stiff and uncomfortable as a 19th Century military man and Sinatra is obviously unhappy about his role as guerilla leader, Miguel, with his awful schoolboy haircut especially distracting. Sophia Loren was making her Hollywood debut in this film, but she was not stretched too much as the stereotypically fiery senorita who takes an interest in Grant, and it's fair to say that none of the actors look particularly comfortable.

Over the years it's been the behind the scenes stories about this film that have tended to attract the most interest. Cary Grant was initially reluctant to appear with Sophia Loren, given that she had never made a film in English before. But when they met he changed his mind, apparently pursuing her romantically, despite his marriage to Betsy Drake and her relationship with the producer Carlo Ponti.

Sinatra was second choice after Marlon Brando, who turned the role down, and when he was cast instead, his estranged wife Ava Gardner was dropped from the part of Juana in favour of Loren. Sinatra was unhappy on the shoot and it shows in his awkward performance. He left the film early and headed back to the US, meaning some extra filming was required on the Universal lot. The husband and wife screenwriters, Edward and Edna Anhalt also fell out on the film and this was their last screenplay together. 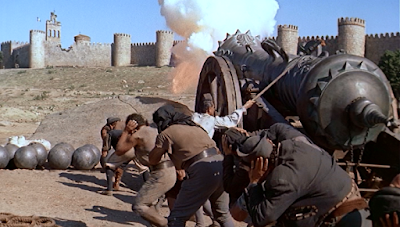 The film has its fair share of spectacle, with plenty of military and religious pageantry as well as some irrelevant local colour.

In a typical touch of excess, the 13 ft cannon of Forester's novel is turned into a gargantuan 42 ft monster in the film.

The score was composed by George Antheil and was one of his final films. In an amusing example of how mixed up the film is, Cary Grant's early scenes are accompanied by the march "The British Grenadiers", which misses the point a bit since Grant's character is in the navy.

The Pride and the Passion wasn't a box office success, and director-producer Stanley Kramer called it "one of the most difficult and disappointing experiences" of his career. Despite the cast of thousands and a lot of money showing on the screen, the film is a stodgy epic that lumbers across the screen with all the finesse of its oversized artillery piece. Not really a precision weapon then, more of a misfiring old blunderbuss that misses the target by a mile.

The Pride and the Passion