As a follow-up to the post on The Spy Who Loved Me, and in tribute to the late Sir Roger Moore, here are 10 of Roger Moore's most memorable film and TV roles. 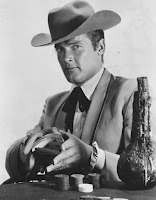 Westerns and Roger Moore go together like … well they don't really. But that didn't stop the producers of the TV series Maverick from hiring him as their new leading man. James Garner had played Bret Maverick for 5 years before he left the series over a contractual dispute. So Roger Moore moseyed into town as Bret's cousin Beauregarde Maverick, with a back story to explain his oh-so-English accent. Moore starred in 15 episodes but, unsurprisingly, no one else ever thought to hire him to play a cowboy. 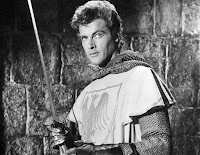 The historical costume adventure series was a mainstay of British commercial TV in the 1950s. The most successful was The Adventures of Robin Hood, starring Richard Greene, but Roger Moore got in on the act with this 1958 series. Moore played heroic Sir Wilfred of Ivanhoe, a medieval knight with a 1950s quiff, who righted wrongs and fought injustice in Ye Olde England. Ivanhoe's loyal companion Gurth was played by Robert Brown, who later took over from Bernard Lee as 'M' in the James Bond series. Ivanhoe ran for 39 episodes and was Moore's first foray into TV stardom.

In the most self-referential role of his career, Roger Moore good naturedly sends himself up in this cross-country car race comedy. Moore plays Seymour Goldfarb, heir to the Goldfarb Girdles fortune, who believes he is actually an actor called … Roger Moore. Cue Moore driving around in an Aston Martin DB5 and making Bond film title puns like “The Fly Who Bugged Me” (and yes, that's the best one).

Based on the Wilbur Smith novel, Shout at the Devil sees Moore play an aristocratic Englishman in Zanzibar on the eve of the First World War. His character is duped by a boozy American poacher, played by Lee Marvin, into helping him smuggle ivory under the noses of the German colonial government. Eventually the two men are drawn into World War One and an attempt to sink a German battleship. This was the second time Roger Moore starred in a film based on a Wilbur Smith novel, after 1974's Gold. 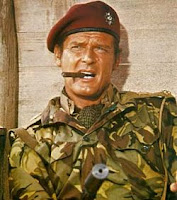 Moore joined a strong cast in this war actioner, alongside legendary boozers Richard Burton and Richard Harris. As pilot and ladies man Shawn Fynn, Moore doesn't stretch himself too much, but does at least look a little more plausible as a mercenary than his out of shape co-stars, even if he did turn 50 during filming. This is one of several war adventures Moore made in the late 1970s, together with Escape to Athena and The Sea Wolves, the latter reuniting him with much of The Wild Geese crew. Moore was sought for the follow-up Wild Geese II, but was less enthusiastic about the storyline.

Moore got to show off his acting chops in this Twilight Zone-ish thriller about a man who comes to believe he has a doppelgänger after recovering from a near-death experience. Moore's character, Harold Pelham, is a staid and dutiful husband, who drives sensibly and dresses conservatively. But his double is a Lamborghini-driving, womanising cad who is destroying his life. Moore later said of this film “It was one of the few times I was allowed to act”.

No, it's not Roger Moore's audition for the film version of Where's Wally? It's Moore as Rufus Excalibur ffolkes ("two small Fs") in North Sea Hijack, where his smooth, polished image is trampled on completely as he's cast against type as a bearded commando who hates women and loves whisky and cats. And wears a bobble hat. This was one of three films Moore made with director Andrew V. McLaglen (together with The Wild Geese and The Sea Wolves) and he acquits himself well in an atypical role. North Sea Hijack was released in the US and some other markets as ffolkes, although I prefer the geographically confused German title Sprengkommando Atlantik. 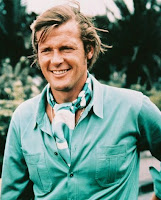 This early 1970s TV series teamed Moore with Tony Curtis, as two jet-set playboys who neatly conformed to national stereotypes. Curtis played Danny Wilde, a brash, Ferrari driving self-made millionaire from the Bronx. Moore was Lord Brett Sinclair, an Aston Martin driving English aristocrat and racing driver. The pair teamed up to solve crimes and chase dames, mostly in England and, when the budget stretched to it, the French Riviera. Moore wore his hair a little longer than we've come to expect, and designed his own wardrobe, so he has only himself to blame for that shirt and scarf combination.

Although Roger Moore had been popular on TV in Ivanhoe and Maverick, it was The Saint that made him an international television star. Moore played Simon Templar, an impeccably dressed international man of mystery who got involved in globe-trotting adventures, was irresistible to women, and occasionally served Queen and country. If you think that sounds like a dry run for playing James Bond then you're right. The show ran for over 100 episodes and gave Moore ample opportunity to flex his eyebrows, as shown in the famous title sequence: 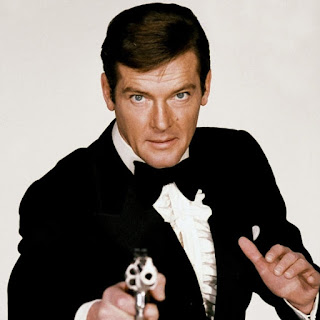 Yes it's the obvious choice, but some things are obvious for a reason. Moore took over from Sean Connery as James Bond in 1973 and played him in 7 films over 12 years, reinventing the character and steering the series through some choppy waters in the process. Moore's Bond was lighter and more humorous than Connery's, but if his Bond hadn't been a success, it's unlikely the series would still be going strong after more than 50 years.

What are your favourite Roger Moore roles? Have I missed out anything great? Let me know in the comments.